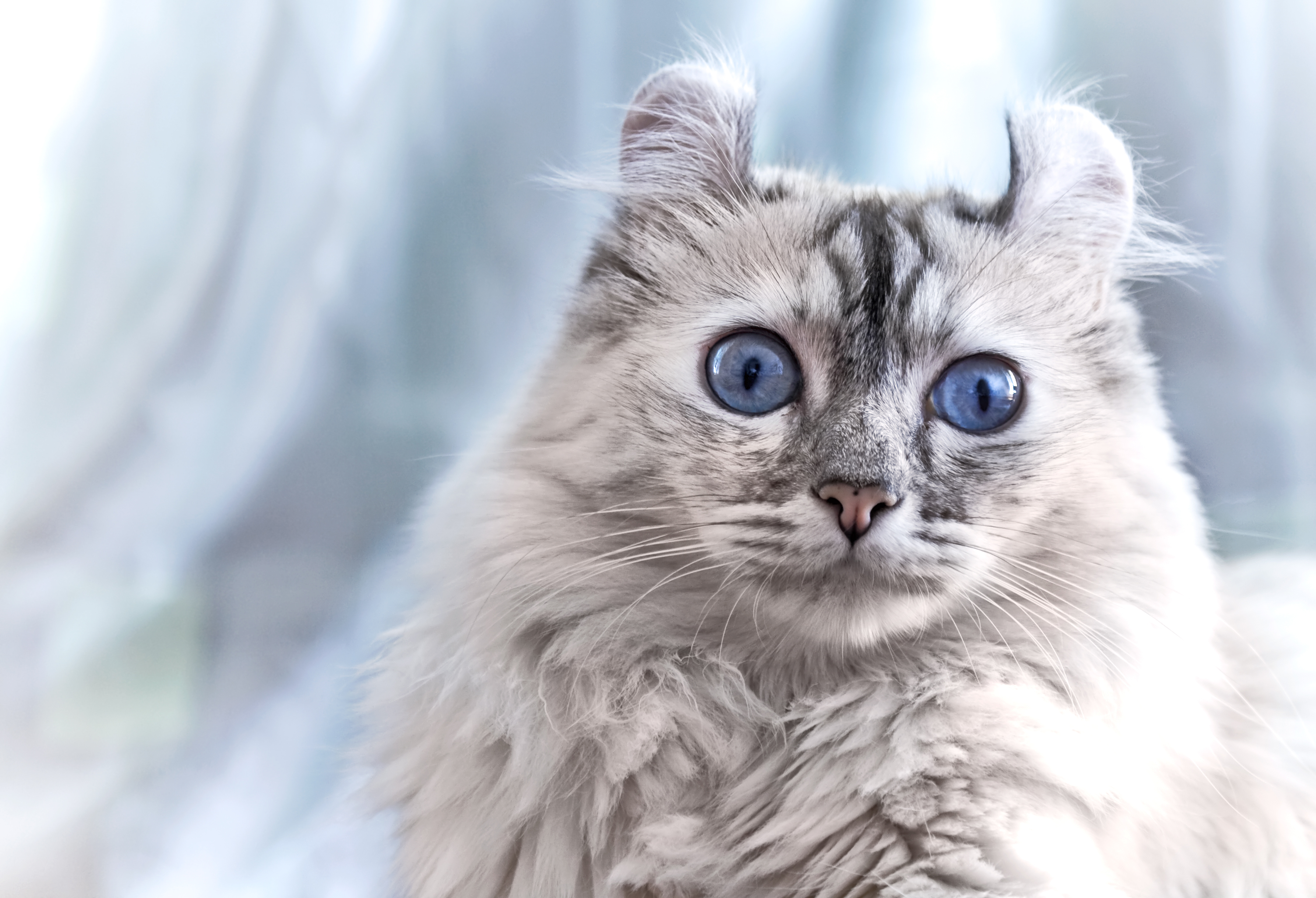 Curls are very affectionate, people friendly cats that adjust very well to strangers and other animals including dogs. They are usually able to cope with many different situations and environments from the noisiest of spaces to the quietest of homes. You can tell their signature look, unique ears that curl in a graceful arc, with an attentive and joyful expressions. Their “unorthodox” looks can sometimes cause a giggle or smirk for people who have never seen an American Curl.

Curls were designed naturally in the wild and have roots to the Lynx cat. This breed has been described as “dog-like” by how it follows its owners around, paying close attention to what their owners do so nothing is missed. The American Curl enjoys high places, like most cats, but are curious enough to explore just about every nook and cranny in your home.

The American Curl is not a particularly chatty cat, but does communicate through cooing, chirps and trill sounds. The American Curl is great with other pets because they like to give new creatures their space and time to adjust to cohabitation in the same house.

At birth, their ears are perfectly straight and don’t start to curl back until around 3-7 days into a tight formation. They will stay this way until they permanently set at around 14-16 weeks. This is the perfect time to adopt an American Curl as you’ll have a full understanding of how your cat's ears will settle. Let’s face it, the curls ears and the degree of arc is probably an important feature if you’re considering this breed of cat. The degree of curl can vary from a slight 80 degrees all the way to a complete folding of the ear at 180 degrees.

Seen, but not heard

The American curl will follow you around with pure curiosity, but they aren’t particularly talkative of demanding like some breeds of cats.  While they do exhibit moderately active behavior and are generally curious and show signs of intelligence, they don’t chirp at you. You’ll notice that the American Curl will always try to be a few steps away so that he’s noticed, but not so intrusive as to interrupt your activities.

If they need to, they will quietly beg and plead for your attention, food, play or whatever affection they need. As you arrive home from work or errands, The American Curl is known to greet you with a head butt which is their way of saying, “Hello. I see you’ve come back”. Many of the breeds are known to extend this gesture to guests that enter your home which might be more of a case of quiet and passive way of letting them know that you’ve entered his domain.

Did I close that door?

The American Curl is intelligent enough and resourceful enough to open doorknobs. He’ll find a need to access the areas he needs to especially if he’s not willing to make a lot of noise to grab your attention. Make sure you close and secure any cabinets or areas you don’t want your Curl getting into. Many Curls enjoy and will learn to fetch. Their wild heritage shows as they carry fake mice and toys in their mouth back to their owners.

Not to worry. The American Curl is equally happy laying down in a lap when it’s time to settle or take a break from playing.

American Curls are generally healthy, but some lines have problems with narrow ear canals, which can lead to ear infections from wax buildup.

The American Curl can have a short or long coat. They don’t have much undercoat, so it isn't likely that their fur will become tangled or matted. It is recommended that you do brush them and run a fine comb through their coats at least weekly so you can remove any dead hair to help assist them with the shedding process.

The Curl is sweet toward children, making him a good choice for families who will supervise children to make sure they pet the cat nicely and don’t pull his ears or tail. He is happy to live with cat-friendly dogs, too, thanks to his amiable disposition. Introduce pets slowly and in controlled circumstances to ensure that they learn to get along together.