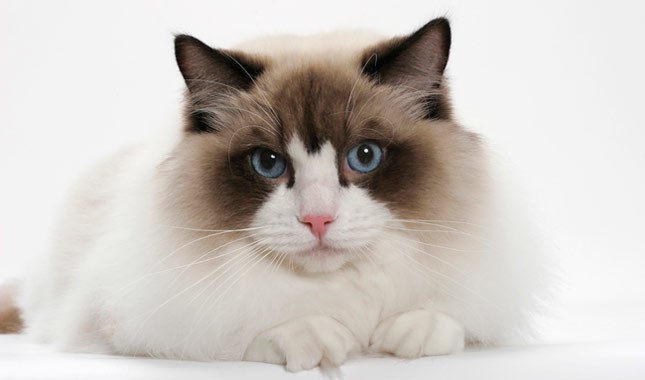 Ragdolls are some of the youngest breeds in the domestic cat lineup. They were originally started by a breeder named Ann Baker in the 1960’s who lived in California. The ideal cat was a gentle creature that was larger in size with a beautiful long coat and the “points” that we see on Siamese cats. The result was the Ragdoll for the breeds willingness to flop into the arms of anyone who picked them up.

It’s known that Persians, Birmans and Burmese breeds were later mixed with Ragdoll to give them the appearance and temperament we see today. Ann Baker truly embodied the stereotype of a crazy cat lady as she’s made numerous claims that the Ragdoll was helped by aliens, CIA testing and mixing with human genes. Clearly these claims were completely fabricated and Ragdoll enthusiast created organizations to separate themselves from Baker and to standardize the breed and get it recognized.

Ragdolls love, love people. They enjoy being picked up by anyone who will hold them and the love to greet guests and their owners at the door. The Ragdoll will follow you around the house waiting for any moment to get into a lap or the chance to be picked up.

Although they are commonly described as docile and gentle, that doesn’t mean they are inactive. Ragdolls, like most cats, enjoy playing with toys and batting around fake mice on the floor. Ragdolls are smart enough to learn tricks and will often come when called. The Ragdoll is not a climber, so you need not worry about counters and tables being their refuge. The Ragdoll is perfectly content on the floor or on easily accessible furniture.

Any cat can have ailments that are related to any cat regardless of breed. It's important to always consult with your breeder about genetic concerns. The Ragdoll is a generally healthy cat, but here are some health concerns that have been noted in this breed:

A Ragdoll’s moderately long fur has little undercoat, which means it is less likely to mat and shed, but that doesn’t mean the cats need no grooming. Comb it twice a week with a stainless steel comb to remove dead hair that can cause tangles. Be sure to comb the fur on the legs thoroughly, especially where the leg meets the body, where mats are most likely to occur.

A rubber curry brush will smooth the fur after you comb it and remove any remaining loose hairs. If you are gentle and don’t pull their hair, Ragdolls will love the attention they receive from you during grooming time. Note that seasonal changes as well as hormonal fluctuations in unaltered cats can affect the length of the coat. The coat will be at its peak in winter. Ragdolls that have been spayed or neutered will usually have a lush coat year-round because they lack the hormonal fluctuations that occur in unaltered cats. Check the tail for bits of poop stuck to the fur and clean it off with a baby wipe.

Bathe a Ragdoll as needed, which can range from every few weeks to every few months. If his coat feels greasy or his fur looks stringy, he needs a bath.

The laidback Ragdoll is perfectly suited to family life. He rarely extends his claws when playing, and he usually doesn’t mind playing dress-up, riding in a baby buggy or being a guest at a tea party. Because of their large size, males are an especially good choice for families with children. Of course, you should always supervise young children to make sure they don’t torment the cat.

With a cat this size, it’s essential to teach children how to support the cat, with one arm beneath the front legs and one beneath the hind legs. Never hold a Ragdoll with the hind end hanging down. He is happy to live with other cats and cat-friendly dogs, too, thanks to his amiable disposition. Introduce pets slowly and in controlled circumstances to ensure that they learn to get along together.