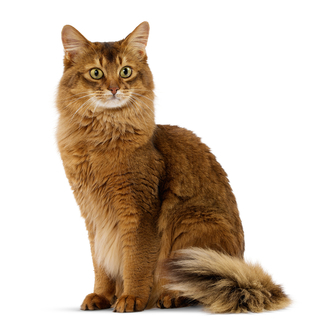 The Somali is named after its believed hometown of modern day Ethiopia. Northern Ethiopia to be exact. There are rumors and speculation that the Somali used to be the cat of Egyptian Pharaohs. These claims have not been substantiated by any research, but are definitely the folklore and rumors of the breed.

Genetic testing has shown that these cats likely came from the coast regions of the Indian Ocean and some parts of Southeast Asia. They likely made their way around the globe and to parts of Ethiopia via trade from ports in India and Asia.

Most modern breeders recognize the Somali as a long haired version of the Abyssinian. Lots of long haired cats were favored in breeding programs shortly after WWII. The breed came into its own right in the 60’s and 70’s

The Somali is basically the Abyssinian that has a sugar rush. They can jump higher and climb objects that are taller. They can play for longer periods of time and will be more curious about all the spaces in your house. Nothing gets past the Somali when he puts his mind to it. This is something that makes the Somali one of those breeds that people didn’t realize they loved until they have the pleasure of living with one. You never quite know what’s in store with the Somali.

Does it sleep? Maybe. Does she ever sit still? Possibly. Whether jumping off furniture or chasing animals in the window, your Somali will never cease to amaze you while still expecting your devoted attention and affection when she’s done. The Somali enjoys all the attention you have to give and will stop at nothing to continue to win your favor.

If you’re not someone that enjoys playing with your animals, then the Somali is probably not the breed for you. From milk rings to balled up pieces of foil and feather, there isn’t a toy that the Somali doesn’t enjoy. Make sure you have lots of things for them to play with and that will keep them from getting into mischief and trying to investigate places you don’t want them. 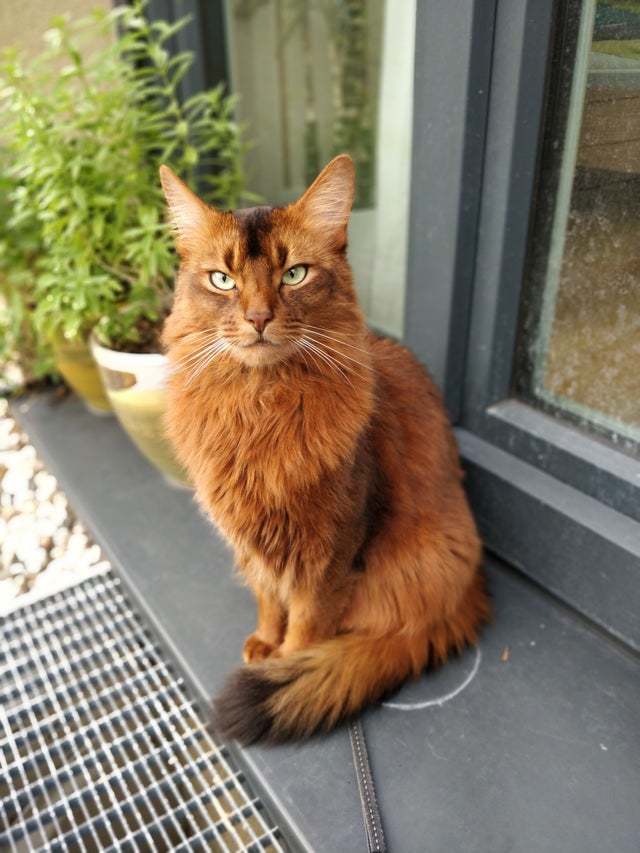 Any cat can have ailments that are related to any cat regardless of breed. It's important to always consult with your breeder about genetic concerns. The Somali is a generally healthy cat, but here are some health concerns that have been noted in this breed:

The medium length coat of the Somali needs a moderate amount of grooming. Comb the coat once or twice a week with a stainless steel comb to remove dead hair, prevent or remove tangles, and distribute skin oils. In the spring, when the cat is shedding his winter coat, you may need to comb him daily. A bath when the cat is shedding will help to remove excess hair more quickly. Check the tail for bits of poop stuck to the fur and clean it off with a baby wipe.

The active and social Somali is a perfect choice for families with children and cat-friendly dogs. He will play fetch as well as any retriever, learns tricks easily and loves the attention he receives from children who treat him politely and with respect.

He’s smart enough to get out of the way of toddlers but loves school-age children because they are a match for his energy level and curiosity. Nothing scares him, certainly not dogs, and he will happily make friends with them if they don’t give him any trouble. Somalis have also been known to get along with large parrots, ferrets and other animals. Always introduce any pets, even other cats, slowly and in a controlled setting.